The success story of the nordluft Waerme- und Lueftungstechnik GmbH & Co. KG at a glance:

1998: Founding of nordluft GmbH by Harry Sauerberg and Dipl.-Ing. Walter Kampers. When deciding to start a business, their years of experience and contacts from their previous occupation at norklima helped them to succed. Opening of the first location in a former chicken coop with 450 m² floor space as well as 2 offices.

2001: Development of our own series of directly heated warm air heaters, TÜV and DVGW tested and certified. Start of production of the first own devices in the course of the DVGW approval. At the time, about 350 units were produced annually. Due to the insolvency of the company KesslerTech / nordklima, ten employees from the production, service and sales were taken over. Thereby, the production and service offering of the nordluft GmbH was greatly expanded. The customers of KesslerTech / nordklima were therefore able to benefit from the know-how and many years of experience in the future as well.

2002: The expansion of the company and the lack of space required a move to Lohne, in the new industrial park Hansapark on the BAB A1 at the Robert-Bosch-Straße 3. There were about 1,200 m² of production and storage space and spacious office space available.

2005: In April, the 1,000 unit of our own warm air heater series were produced. Continuous expansion and an extansion of the service range brought the existing capacities to their limits shortly. The plan of an own company building was started and was implemented in 2005 by moving into the new location. This disposed a 1,500 m² production hall with adjacent warehouse and a modern office building

2006: nordluft receives the Lower Saxony Craft Innovation Award for the development of a biomass warm air heater. This prize was awarded under the patronage of the Prime Minister of Lower Saxony Christian Wulf.

2008: In the course of the succession planning of the company management, Joerg Reins, Klaus Doedtmann and Cornelius Griefing were confered procuration in early 2008 and brougth in as shareholders of the renamed nordluft Waerme- und Lueftungstechnik GmbH & Co. KG.

2010: The 50th employee becomes part of the nordluft team and receives a future-oriented workplace.

2013: Employee Jens Lienesch is confered procuration and brought in as a shareholder of nordluft Waerme- und Lueftungstechnik GmbH & Co. KG.

2015: A next milestone has been reached. Due to progressive growth and high customer satisfaction the 5,000 warm air generator of the own equipment series was produced in October.

2018: nordluft celebrates its 20th anniversary with a company excursion with all employees and their partners. A beautiful day marks the beginning of a promising future.

2019: Christian Kampers, son of the managing director and founder Walter Kampers, was given power of attorney on the first of January 2019 and has been a partner of nordluft Waerme- und Lueftungstechnik GmbH & Co. KG. 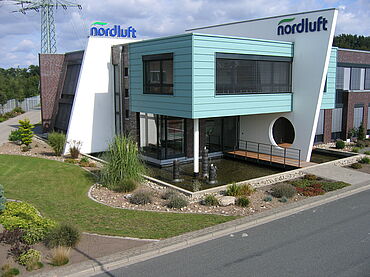